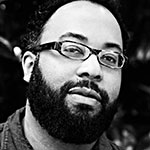 Kevin Young is the Director of the Schomburg Center for Research in Black Culture, newly named a National Historic Landmark, and poetry editor of the New Yorker. He is the author of thirteen books of poetry and prose, including the forthcoming Library of American African American Poetry anthology featuring 250 years of Black poets in the Americas (out in September 2020). Much of the research for the anthology was conducted at the Schomburg Center.

Young's most recent book of poetry, Brown (Knopf, 2018), and his nonfiction book, Bunk: The Rise of Hoaxes, Humbug, Plagiarists, Phonies, Post-Facts & Fake News (Graywolf, 2019), were both named New York Times Notable Books, and longlisted for the National Book Award. Bunk was also a finalist for the National Book Critics Circle and the PEN/Jean Stein Book Award, and named a "Best Book of 2017" by NPR, the Los Angeles Times, Dallas Morning News, Atlanta Journal-Constitution, Vogue, the Atlantic, and others. Young's previous nonfiction book, The Grey Album: On the Blackness of Blackness (Graywolf Press, 2012), won the Graywolf Press Nonfiction Prize and the PEN Open Book Award; it was also a New York Times Notable Book for 2012 and a finalist for the 2013 National Book Critics Circle Award for criticism. He was inducted into the American Academy of Arts & Sciences in 2016 and is University Distinguished Professor at Emory and the Bain-Swiggett Professor at Princeton for fall 2019.

Young is the editor of eight volumes, including The Collected Poems of Lucille Clifton 1965-2010 (BOA Editions, 2012 and winner of the Hurston-Wright Prize); The Hungry Ear: Poems of Food & Drink (Bloomsbury, 2012); The Best American Poetry 2011; and The Art of Losing: Poems of Grief & Healing, one hundred and fifty devastatingly beautiful contemporary elegies that embrace the pain, heartbreak, and healing stages of mourning (Bloomsbury, 2010).

Book of Hours was a finalist for the Kingsley Tufts Poetry Award and won the 2015 Lenore Marshall Prize for Poetry from the Academy of American Poets—a prize that recognizes the most outstanding book of poetry published in the United States in the previous year.

Named University Distinguished Professor at Emory University, Young was inducted into the American Academy of Arts and Sciences in 2016. His many other honors include a Stegner Fellowship in Poetry at Stanford University, a Guggenheim Foundation Fellowship, a MacDowell Colony Fellowship, and an honorary doctorate from Beloit College.