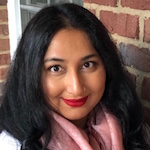 Soniah Kamal's novel Unmarriageable: Pride & Prejudice in Pakistan, is a parallel retelling of Jane Austen's classic novel which NPR says "succeeds in being both a deliciously readable romantic comedy and a commentary on class in post-colonial, post-partition Pakistan." Unmarriageable is a Financial Times Best Book of 2019 so far, a New York Public Library Summer 2019 Pick, a BookBub Best Book of 2019 so far, a finalist for the PHS Reviewers’ Choice Awards, a Library Reads Pick, People Magazine Pick and more with starred reviews from Publishers Weekly, Library Journal, and Shelf Awareness. Soniah’s debut novel, An Isolated Incident, was a finalist for the Townsend Award for Fiction and the KLF French Fiction Prize. Her short story "Jelly Beans" was selected for The Best Asian Stories Series 2017 and her essay "The Fall: How to Survive Your Father’s Imprisonment" was nominated for a Pushcart Prize. Soniah's TEDx talk is about regrets and redemption. Her essays and short fiction have appeared in The New York Times, The Guardian, Buzzfeed, Catapult, Literary Hub, The Normal School, The Missing Slate and more. Soniah was the recipient of a Susan B. Irene Award from St. Johns College (Maryland), where she received a B.A. in Philosophy, and was Paul Bowles Fiction Fellow at Georgia State University where she earned an MFA in Creative Writing. Soniah grew up in Pakistan, Saudi Arabia and England and resides in Atlanta, Georgia.