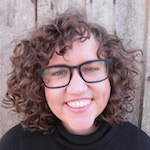 Kimberly Belflower is a playwright and educator originally from a small town in Appalachian Georgia. Her play, Lost Girl, is published by Samuel French and won the 2018 Kennedy Center Darrell Ayers National Playwriting Award. Her other plays include John Proctor is the Villain, Gondal, Teen Girl FANtasies, and The Sky Game, which have been commissioned, produced, and developed by Milwaukee Repertory Theatre, The Farm Theatre, We the Women Collective, Peppercorn Theatre, Less Than Rent Theatre, Front Porch Arts Collective, Cohen New Works Festival, as well as many colleges and universities across the country. Kimberly has also worked as a writer and narrative lead for Meow Wolf, Santa Fe's celebrated immersive arts company. Kimberly was a founding member of the New York women’s writing group, The Beehive Collective, and the founder of a creative arts program for preteen girls in Austin. She proudly holds an MFA from the University of Texas at Austin.