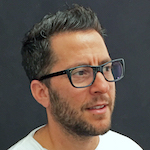 T Cooper is a novelist, filmmaker, journalist, and television writer. He is the author of nine books, including the best-selling novels Lipshitz Six, or Two Angry Blondes (Penguin) and The Beaufort Diaries (Melville House). His most recent non-fiction book is Real Man Adventures (McSweeney's), and he is co-author, with Allison Glock-Cooper, of the four-part Young Adult novel series Changers (Akashic).

Cooper directed, produced, and filmed the feature documentary Man Made, recipient of a Sundance Institute grant and fellowship, and winner of the Fox Inclusion Award. Man Made is distributed by Journeyman Pictures, and currently streams on Amazon. The film appeared at more than 80 film festivals worldwide, and won 14 Best Documentary Audience and Jury Awards. Cooper also adapted and produced an animated short called The Beaufort Diaries, based on his own graphic novella of the same name; the film premiered at Tribeca and South By Southwest. He has directed and filmed several other short films, including--most recently--directing a music video for Atlantic Records.

Cooper is currently a writer and Executive Producer on The Blacklist (NBC) television series. Other TV writing credits include The Get Down (Netflix), and Copper (BBC America). He has also written original commissioned scripts for Showtime, Lifetime, YouTube, and Mark Gordon Pictures.

Cooper's shorter, non-theatrical writing has appeared in a variety of publications, including The New Yorker, The New York Times, Harper's, Mother Jones, The Believer, Esquire, One Story, Bomb, The Guardian, The Brooklyn Review, The Georgia Review, Poets & Writers, O: The Oprah Magazine, and several others, including on Public Radio International.

Cooper earned an MFA from Columbia University (Fiction), and a BA from Middlebury College (English). He has been awarded residencies to The MacDowell Colony, Ledig House International, and The Millay Colony, where he was The New York Times Foundation Fellow.