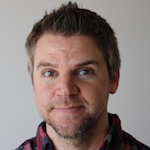 Originally from New Orleans, Gabriel Houck has earned MFAs from the California Institute of the Arts and the University of Iowa’s Nonfiction Writing Program, and a PhD in creative writing from the University of Nebraska-Lincoln, where he has taught in the English Department since 2016. His first collection, You or a Loved One, won the 2017 Orison Fiction Prize, and was published in 2018 by Orison Books. His stories, “The Dot Matrix” and “When the Time Came,” were selected as distinguished stories in the 2017 and 2015 editions of The Best American Short Stories, respectively. Other stories from his collection have won Mid American Review’s 2014 Sherwood Anderson Fiction Prize, earned 2nd place in the Glimmer Train 2016 New Writer Awards, been nominated for a Pushcart Prize, and earned finalist honors in StoryQuarterly’s Fiction Prize, among others. Gabriel has received scholarships and fellowships from the Tin House Workshops (2016), the Sewanee Writers Workshop (2017), the Vermont Studio Center (2018), and his fiction appears in Glimmer Train, The Sewanee Review, The Chattahoochee Review, Mid American Review, Cream City Review, Western Humanities Review, Salamander, New Delta Review, Grist, PANK, Moon City Review, Fourteen Hills, Bayou, Fiction Southeast, Psychopomp, Lunch Ticket, Sequestrum, The Cimarron Review, and The Pinch.