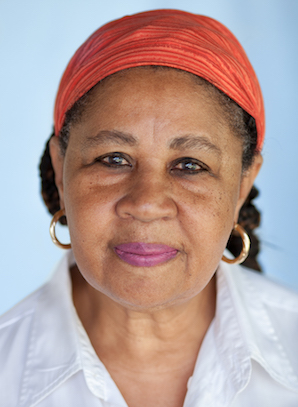 Jamaica Kincaid was born Elaine Potter Richardson on Antigua in 1949. In 1965 she left Antigua for New York to work as an au pair, then studied photography at the New York School for Social Research and attended Franconia College in New Hampshire.

In 1972 she changed her name to Jamaica Kincaid and was a staff writer for the New Yorker magazine from 1974-1996, publishing her first book, At the Bottom of the River, a collection of short stories, in 1983. Her first novel, Annie John, followed in 1985 - the story of a wilful 10-year-old growing up on Antigua. Further novels include Lucy (1990); The Autobiography of my Mother (1996), a novel set on Dominica and told by a 70-year-old woman looking back on her life; and Mr. Potter (2007). A Small Place (1988), is a short, powerful book about the effects of colonialism. My Brother (1997) chronicles her brother's battle with AIDS.

Her love of gardening has also led to several books on the subject, including My Garden (2000) and Among Flowers: A Walk in the Himalaya (2005), a memoir about a seed-gathering trek with three botanist friends. Her novel See Now Then (2013) won the Before Columbus Foundation America Book Award in 2014.